L.O.V.E. from a Tarot Reader's perspective 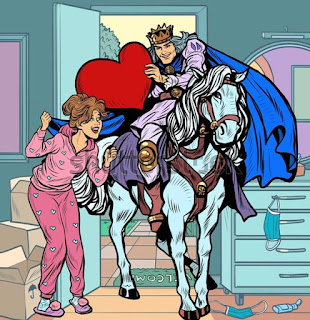 L.O.V.E    Everyone knows what it is, and most want some! The question asked of most readers is, “When am I going to meet ‘The One’?”

While it would be wildly exciting for a reader to share good news with all clients, unfortunately this isn’t always the case. Sometimes nothing shows up in the reading except milestones for the client pertaining to career, family, friends, etc. This can be exceptionally upsetting for the client who was hoping to receive good news, so they make appointment after appointment hoping that the reading will show something different. In some cases, they hop from one reader to another hoping to hear what they want to hear.

Another question that is often asked is, “Am I on a Twin Flame journey and when will I meet my Twin Flame?” Also a tough one to answer when the reading isn’t clear. It may show a significant other coming into the client’s life. The reader can share the character traits that shine through, and when it could possibly happen, however, there isn’t a defining answer whether it’s a Twin Flame or not. At one stage there it was thought that a particular card denoted a Twin Flame relationship, but I’ve come to realise that it’s not 100% accurate.

My advice to clients who want a reading around love is to take the reading with light-heartedness. While the reading may indicate that a deeply intense relationship is imminent, and the client jumps in head first without using their own discernment, they could be heading for heartbreak. One can become too complacent when insights have been provided – after all, the reading showed that only good was going to become of a relationship. But … hey … the pending good relationship may be hijacked in the meantime by a player who has no intentions of making a commitment, or worse. The pending good relationship that hasn’t shown up yet is then delayed … the client’s path takes a detour and the intended-one will still come into his or her life as divinely orchestrated, however, at a later date.

In my own experience, I’ve been told over years and years that I’m going to meet someone near water. This could be at the beach, a river, a stream, even a fountain. Every time I’m near water subconsciously the thought comes up, “Is today the day?” Just by the way, I’ve recently moved close to a river and I’m keeping my eyes peeled …haha!

There was a time when I was convinced that I had met my Twin Flame as I had very psychic experiences with the guy – picking up scents and smells and knowing instantly what he was doing, and feelings, and vivid dreams – until I couldn’t handle the heartache and I asked the angels to take away the connection. It stopped immediately. Now I keep my heart open to making a connection with someone who will enter my life at the right time. I haven’t put myself in a box and defined how and when. Actually, it’s more fun this way. Over the past months, I’ve met more men from all walks of life and merely observed them instead of sizing them up as a potential partner.

I want to share with you a personal experience I had many years ago involving the then love-of-my-life who visited a reader and took things literally. It damaged our relationship, broke my heart, but also opened up the path of spirituality for me.

I had been dating *Larry (not his real name) for a while and I was totally struck on this man. He was tall, dark, handsome, great shoulders, terrific tan, surfer … you know the type? My dog also loved him, which was +1000 points in my eyes. It was a few months into the relationship when Larry started acting up. He found fault with the way I did things. I simply couldn’t get anything right. I was a great sulker in those days, so I took to doing what I did best, and sulked. I clammed up. One evening he asked me to meet him for coffee and there in a restaurant told me that he had been to see a psychic! Well, I was all ears…

The old psychic had told Larry that he was going to meet many women in his lifetime and have many relationships, and that the next woman he was going to meet would be wearing a green shirt, carrying a briefcase and she’d have a cat (not sure whether the cat was with her or at home as that part wasn’t shared – still find that puzzling to be honest). I was waiting with baited breath – my mind was working overtime. I couldn’t recall carrying a briefcase at any time, I didn’t have a cat, but I had a green shirt though!

Talk about being in a hurry to get through your lifetime to fall in line with what was forecasted.

Of course I was devastated so I stayed in bed for a couple of days to lick my wounds, and then made an appointment to see the psychic. I was pleasantly surprised by this dear old man who was on point with a few things he shared with me, and after the reading I confessed why I was really there – to see the person who had ruined my future for me.

“Oh Larry’s an idiot, don’t take any notice of him. I did you a favour. He’ll have many women in his lifetime and will struggle to commit to one. You were partners in a previous lifetime in France and you broke his heart then, and now it’s his turn to break yours.” I don’t know if that was supposed to appease me, but somehow it must’ve helped because I went home and packed up all Larry’s belongings, left them next to the outside bin, and then took pleasure in stomping on his alarm clock.

By the same token, the dear old man invited me to participate in his weekly group sessions and I toddled along and met a torrent of people who helped me open my mind and explore the spiritual world. There I met my spirit guide and was shocked to learn that I had a huge angel next to me who took up most of the room. My attention was now elsewhere and I was no longer pining for someone who didn’t appreciate me.

What my point is that when a reader picks up that the client is about to meet someone new, it’s not necessary to go into great detail about how and where it will happen, what the person will be wearing, what kind of watch he has, or if he’ll be wearing glasses … If I give you any details about the prospective suitor it’s because your angels or guides are channelling this through to me, and I’m being shown something in particular. Becoming caught up in the nitty gritty about what a person looks like or wears, may channel the client’s focus on to someone completely wrong for them, and they could miss out on an opportunity. Remember that we all have freewill, and if a reader makes a statement that a client is without a doubt going to meet someone with curly brown hair, blue eyes and gold-rimmed specs, that dear client is going to zone in on everyone with those attributes. It’s not ethical and it’s not right to be manipulated.

While I try my best to give as much information about the character of someone coming into a client’s life, it’s not always clear cut. On occasion, I see two or three potential partners coming in and it will be rightfully so that the client is discerning enough to make their decision about who they are drawn to and find attractive. Where there is a warning around a potential suitor, I also share that information. I’ll give you an example around this. A particular client came to see me and I saw that she was going to meet up with someone she already knew. However, the message was clear that this new friend would help himself to her things, and she would find herself looking for these things over the next few days! I told her that if she could cope with having a relationship like this, then it would be her decision to go-with-the-flow, but she was given fair warning. This very courageous client chose to go-with-the-flow but found after a while it wasn’t working because he became too brazen with his pickings!

It is wise to be aware of what irritates you about your special someone when entering into a new relationship. You may feel that once you’re in the relationship you’ll change their hair, their dress, the way they speak or behave … Perhaps he likes to wear open toe sandals and socks, but the rest of his wardrobe is pretty funky. Your thoughts may be that you’ll get rid of those shoddy shoes and get him to wear the latest trend. Somewhere along the line you may find that he’s never going to give up those sandals and socks and when you close your eyes, it’s all you can see. Remember, that little niggly irritation will become a huge mole on your partner’s nose when things aren’t going as planned.

On a final note, there’s nothing wrong with the desire to fall in love and find that special someone. It’s the most wonderful feeling in the world to have butterflies in the tummy and feel your beloved’s lips on your own … sigh! Let it all happen naturally though and don’t manipulate the situation. Allow things to unfold and allow yourself to be surprised. When you’re feeling good about yourself, that’s when you’ll attract the most amazing people into your life. When you’re desperate and forcing things to happen, that’s when you’ll repel the good energy. Be mindful about filling your aura with love on a daily basis to help you with your romantic journey, and remember to ask the romance angels for help along the way!